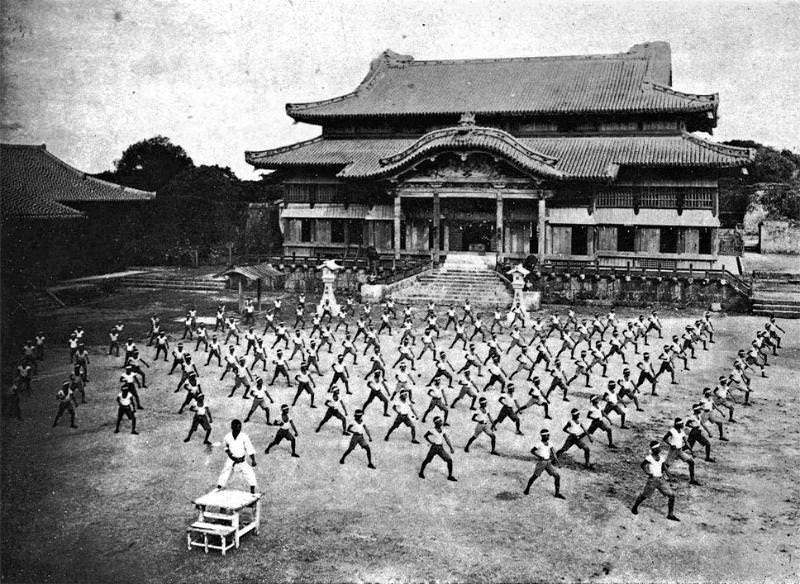 In Okinawa, there were three basic styles of martial arts named after the towns they were developed in: Naha-te, Shuri-te and Tomari-te. Goju-ryu ultimately developed from Naha-te. These styles developed in Okinawa in the 19th century from the Fujian province in southern China.

The development of Goju Ryu—The Creation of Okinawan Goju Ryu

Okinawa (Ryukyu) began sending trade/tribute delegations to China in 1374 to strengthen relations, and China sent delegations there as well. Between 1374 and 1633, 384 missions were sent to China. A permanent trading station was established in Quanzhou, Fujian province which lasted until 1875. Many famous martial artists visited and trained here. China even sent ’36 families’ to Okinawa in the 14th century who settled and integrated into the society. Okinawa had a strong trade based economy and relative peace from 1429-1609. From the beginning of the 15th century, Okinawa also sent trade missions to Kyoto, Japan via Kyushu. After the Japanese civil war, Japan asked Okinawa to help them conquer Korea but they refused. In 1609 Satsuma (Kyushu) invaded Okinawa, but publically they made it seem that Okinawa was still an independent kingdom so Satsuma could benefit from the trade agreements with China.

The people of Okinawa had to actively hide their Japanese connection from the Chinese. Their trade declined, and they had to pay large tributes to Satsuma so they began shifting to an agricultural based economy. The soil was very poor, and between 1800-1854 a string of natural disasters and disease epidemics crippled the nation. The US came in 1853 to demand trade, and also forced Japan to open their borders to the US as well. In 1871, Japan informed the king of Okinawa that they are now officially a prefecture of Japan and they need to close their borders to China, so the post at Quanzhou was closed down. The king was removed in 1879 and the people were forced to learn the Japanese language and customs. Their expertise in Chinese classics were all but useless, and many moved abroad to find better opportunities. The next 65 years of colonialism, poverty and general neglect is when Goju-ryu was developed.

Development of Karate in Okinawa

In Okinawa, there were three basic styles of martial arts named after the towns they were developed in: Naha-te, Shuri-te and Tomari-te. Goju-ryu ultimately developed from Naha-te. These styles developed in Okinawa in the 19th century from the Fujian province in southern China. Every two years there was a ship sent from Naha to Fujian carrying guards who likely trained in Fujian when they were there.

Seisho Aragaki was said to be the first teacher of Kanryo Higashionna, but Higashionna’s training background is difficult to determine exactly. Aragaki trained with the famous Monk Fist boxer Wai Xinxian in Fujian for a while, and also taught at Taitei Kojo’s dojo. Around 1870 Aragaki introduced Higashionna to the Kojo dojo in Fujian where he trained with Wai Xinxian (Shinzan) and others. Seisho Aragaki also taught Chojun Miyagi (not to be confused with Miyagi’s other teacher Ryuko Aragaki). Aragaki didn’t leave behind a style but is thought to have taught the katas Seisan, Shisochin, Sanseiru, Sanchin and Suparinpe (peichurin). For most of his students, he only taught Seisan for the first seven years of their training. He’s also credited with creating the kata Unshu, and was a great kobudo master. During the last Chinese delegation in 1866-1867, Aragaki was called upon to demonstrate his martial arts skills for the Emperor. He was one of the best martial artists of his time.

Kanryo Higashionna began training with Aragaki (~1867) when he was a teenager, and after his father was killed in a fight. When Aragaki had to leave for China in 1870 on a mission, Higashionna travelled to Fujian to train at the Kojo dojo with Wai Xinxian, Iwah and a military envoy named Ason. These three were thought to have taught many of the great Okinawan martial artists of the 19th century. After this, Higashionna began training with the basket weaver Xie Zhongxiang (Ryu Ryu Ko). After 10 years of training in China he went back to Okinawa and ultimately had to resort to teaching martial arts to sons of wealthy Naha families when his business failed. He was very strict with his students and only taught them Sanchin for the first three years. He appears to have only taught four forms (Sanchin, Seisan, Sanseiru and Pechurin or Suparinpe) which came from the Chinese crane system. He also didn’t teach all of the forms to all of his students – usually just Sanchin and one other. Some of his students included Seiko Higa and Chojun Miyagi. He called his art Shorei-ryu, which was changed to Naha-te after his death. Miyagi was left with responsibility of the art.

Chojun Miyagi was born into a wealthy family and at age 11 he began training with Ryuko Aragaki who was a Tomari-te expert. After three years, he was introduced to Higashionna in 1902. His training was severe, including a lot of shime and physical conditioning using chishi, heavy jars, dumbbells, kongoken, makiwara and other things. Sanchin training lasted for hours, and the kata was quite different than it is today in that the hands were open and the breathing lighter. After military service in 1910 Miyagi trained in Judo then went back to Okinawa to train more with Higashionna and Yasutue Itosu from whom he learned Gojushiho. After Higashionna’s death in 1914, Miyagi went to China for two months with his friend Wu Xiangui (1886-1940) to study the history of his art. He noticed the breathing in Chinese forms of Sanchin was different, so he changed it. Miyagi probably collaborated with Wu to develop Tensho and Saifa. Wu likely had a large impact on the development of Goju-ryu through his friendship and training with Miyagi. Wu had trained in White Crane (Whooping style) from his uncle who may have trained with Xie Zhongxiang (Ryu Ryu Ko). Wu introduced Miyagi to many famous Chinese martial artists including the monk fist master Miao Xing, which led him to develop the Gekisai kata.

Miyagi’s students included Seiko Higa, Eiichi Miyazato, Meitoku Yagi, Seikichi Toguchi, Gogen Yamaguchi and others. His training regimen was similar to Higashionna – only a couple kata for each student, but he added arm conditioning, yakusoku kumite and kakie as well. Miyagi named the art Goju-ryu in 1930 based on a passage in the Bubishi – “Everything in the universe is breathing hard and soft”. In 1933, Okinawa was officially authorized a branch of the Dai Nippon Butokukai (All Japan Martial Arts Federation) and Miyagi was the first Okinawan to be awarded the rank of Kyoshi from Japan. Miyagi travelled extensively in the 1930’s and was the first Okinawan to teach in the US (Hawaii). Miyagi also studied Pa Qua Chang in order to further balance out the hard side of his art. The war was especially hard for Miyagi and it had a large impact on the development of Goju-ryu. His third son and two of his daughters were killed in the war. His friend Wu Xiangui died in 1940, and many of his best students were also killed including his senior student Shinzato. Most of his research was destroyed and he fled north with his family.

He only began teaching again after the war, but the way he taught and the curriculum seemed quite different from the way it was before the war. He formalized his curriculum and created the beginner Gekisai kata. A lot of teaching was left to Miyagi’s assistants, and different senior students had learned different variations of kata from different periods. Miyagi died of stroke in 1953 which precipitated a rather bitter battle of who would succeed him, since he didn’t name a successor. This is also the time when Goju-ryu started splintering into various unique and different versions. Miyagi’s family gave his training equipment to Eiichi Miyazato which he took to mean he was the successor. However, his family later awarded Meitoku Yagi with Miyagi’s gi and obi which he interpreted as permission to be the successor. Gogen Yamaguchi also claimed to be Miyagi’s successor despite having only trained with him for short periods of time. Many of these students quarrelled among each other and were vying for position.

Articles in this Series