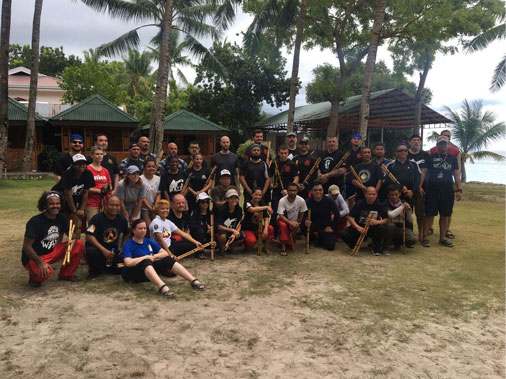 MATTI Gathering and FMA Festival in the Philippines.

In March 2018, several students from CMAC Mississauga, as MATTI Canada, travelled to the Philippines to train in seminars in Manila (MATTI Gathering) and in Bohol (FMA Festival).

Guro Jason Bassels taught his signature doble baston (double sticks) to attendees from Finland, Romania, Brazil, Japan, France, USA, and more. A tropical rainstorm didn’t stop MATTI Canada (that’s us) from training-in fact, it set the tone for one of the most high-energy training sessions of the week! Considered one of the most challenging and intricate aspect of arnis training, doble baston requires distancing, coordination, and dexterity from both sides of the body, in addition to practicing safety!

Bohol is a province of the Philippines, in the country’s  Central Visayas Region. Panglao, Bohol is a famous tourist destination for it’s white sand beaches and world-class diving sites. It is very accessible to other natural wonders of Bohol such as the Chocolate Hills, the countless springs, rivers, falls and caves and the ever cute tarsier, the smallest primate in the world, and are the only ones entirely carnivorous! Tinikling is a traditional Philippine dance wherein dancers have to coordinate between two (sometimes more!) sliding, tapping, and beating bamboo poles.

Guro J Bassels demonstrates the cane during the Gala Night

Canadian delegates with GMs and Masters of Filipino martial arts.

We hope you can join us when we return there! Pugay!