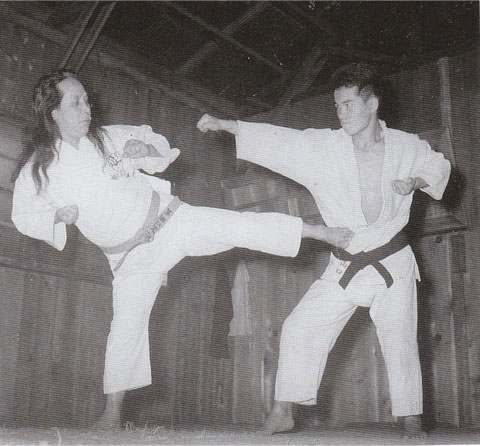 After the War, Goju Ryu spread across North America and the world.

The Evolution of Goju Ryu

Jitsumi (Gogen) Yamaguchi is credited with the spread of Goju-ryu across the world and is one of the most famous martial artists of all time. In his early days, Gogen would get into a lot of fights – he was quite tough. This is probably why Chojun Miyagi gave him the nickname “Gogen” which means “rough” – Yamaguchi officially changed his name to Gogen as he was honoured to have Miyagi give him this name. His personality was quite a contrast with Miyagi who was quite a benevolent man and was not known to injure anyone seriously in a fight. The influence that Miyagi had on Gogen and his training in Goju-ryu ‘softened’ him over the course of decades. Yamaguchi initially trained with a student of Miyagi – Maruta Takeo, but also trained with Miyagi himself for a couple years and Meitoku Yagi later.

Yamaguchi was allegedly given permission by Miyagi to spread Goju-ryu in mainland Japan, however it seems that somewhere Yamaguchi took this to mean that Miyagi was naming him successor of the art of Goju-ryu rather than just the head of the Japanese branch. Yamaguchi even reportedly tried using Meitoku Yagi as a middle man to get Miyagi to name him hanshi (which was apparently unsuccessful). I find it interesting that on the Goju-kai USA website states that Chojun Miyagi awarded Yamaguchi a 10th dan in 1951. Miyagi was known not to award dan ranks to any of his students. Miyagi had several students who trained with him for many years – significantly longer than Yamaguchi trained with him. It seems unlikely that Miyagi would favour Yamaguchi over his other students.

Nevertheless, Yamaguchi was very successful in spreading Goju-ryu in Japan and around the world. He founded the Goju-kai (International Karate-do Goju Kai Association – IKGA) in 1935 and it was officially chartered in 1955. He also invented Jiyu Kumite in 1934 which brought Goju-ryu into the mainstream by popularizing tournaments. Interestingly, since most Goju-ryu kicks were too damaging, only mae geri was really applicable in tournaments so Yamaguchi added new kicks including yoko geri, ushiro geri. The Japanese version of Goju-ryu is externally harder than the Okinawan version with heavier breathing. During the war, he was captured by Russians but was able to impress them and be allowed to teach the Russian guards martial arts. After the war he opened his dojo in Tokyo, and held large martial arts exhibitions. He also started a network of independently owned martial arts schools which grew rapidly. He also helped form the All Japan Karate-do Federation in 1964 which is known today at the Japan Karate Federation (JKF). In order to further bring Goju-ryu into the mainstream he created the Taikyoku katas to help beginners progress towards more complex forms. By 1966 there were over a thousand dojos in the network and tens of thousands of members.

Gogen’s son Gosei was largely responsible for the spread of Japanese Goju-ryu in the US. He made some changes to reflect differences between Japanese and North American culture. For example, it became less militant, they didn’t use makiwara and weren’t regularly hitting students. Generally it was still fundamentally the same as the traditional Japanese Goju-ryu.

American style Goju-ryu was popularized by Peter Urban and others, and is very different from traditional Japanese Goju-ryu. Peter Urban opened the first dojo in Manhattan in 1960. He studied with Mas Oyama, Richard Kim and Gogen Yamaguchi in Japan. However, by 1964 he had a permanent falling out with the Goju-kai and created his own style of USA Goju. He had been training for ~11 years by this point and was a sandan or yondan. Peter Urban made the following significant changes to the style, among others: use of black gis, alteration and removal of some Taikyoku katas and addition of others, alteration of the openings of the katas and bows, alteration or removal of some blocking and striking patterns, jiyu kumite and street self-defense were more prominent, breathing was altered, and the details of eleven Goju-ryu kata were altered. Gosei Yamaguchi would not tolerate this kind of tinkering of the art, and expelled many of the member organization from the Goju-kai in the US.

Generally there has been a decline in interest in classical Goju-ryu in North America. There are many possible factors for this, but some may include a general lack of compatibility between North American culture and the style. Goju-ryu is very traditional, inflexible and rigid and requires a lot of dedication. There is no ‘street self-defense’ training and there is no sparring traditionally. In North America the average person isn’t willing to dedicate a lifetime of hard training to be a better more benevolent person, without getting something more tangible out of it on a shorter timeframe. North Americans simply don’t understand the value proposition. Also, North American ego and disregard for following tradition are additional traits which make it difficult to maintain such an art here. There are still some independent organizations trying to teach in accordance with traditional Okinawan or Japanese Goju-ryu but the art has splintered and fragmented to such an extent that it may be in danger of becoming unrecognizable and losing its definition and value as a singular art.

In Canada, Sensei Platt and the CMAC organization are continuously working to adapt the traditional Japanese art to align with unique Canadian societal and cultural values, while still aiming to preserve the historical roots of the art. This seems to be a difficult and delicate balance where there is inevitably some loss or modification of some traditional aspects such as etiquette, elements of curriculum, and variations of kata. This is inherent when trying to adopt an art that wasn’t designed for or evolved within our unique culture. While we must lose some aspects of the traditional art, we gain something which is quite powerful – an art which individuals in Canada identify with and can take into their lives and derive personal and societal benefit from. These goals and benefits are not different from those sought after and achieved in Japan, it’s just the way they are derived which is unique to our cultural paradigm. We as Canadians should embrace the change and evolution in the art of Goju-ryu, and with that conviction we can forge a discreet art which can be passed down and refined further over time.

Articles in this Series