Sensei’s Stories: Rocks in the River – Zen and the Fishbowl 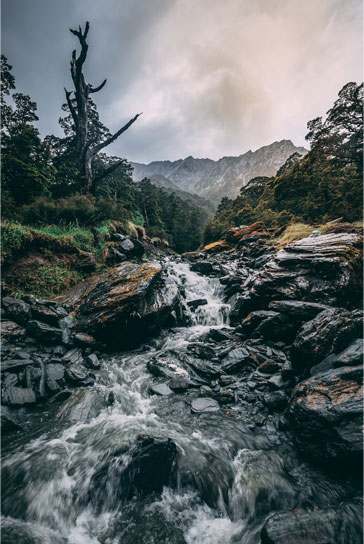 How many of us have gotten so comfortable holding on to our rock that we’re too scared to let go and experience the broader world around us? What more might we experience as a result of doing so? The possibilities are endless.

We live in an amazing age – never in history have we had more access to tools, technology and information than we do today. As I finished school and entered the workforce however, I noticed that despite all this, I still carried stress with me on a daily basis.

I’ve always believed that we’re each responsible for finding our own happiness and peace in life, whatever form that takes. Part of my search for these things has led me to examine my life through a variety of different lenses with the goal of finding my passions. Ultimately, here’s what I learned: I’m most passionate about the arts (photography and karate, among others), personal finance, travel and helping others in their career.

As I was thinking about why I’m passionate about these things though, I realized that they all had one thing in common: in one way or another, all of them play a role in my view of what I need in my life to be happy and at peace. This is the reason that I’ve decided to write about personal finance, the arts, travel and careers with an eye toward personal happiness, peace and fulfillment

This post – titled Rocks in the River – is the third in a series of posts titled Sensei’s Stories.

They contain valuable morals my Sensei wishes to impart. You can read the first one here.

There once was a village of people who lived beneath the surface of a vast river. This river had a fast current, and as a result the members of this village had to hold onto rocks that jutted up from the riverbed in order to avoid being swept downstream by the current.

One day, a man who was holding onto his rock lost his grip, and the river began to sweep him downstream. The other villagers were mortified, believing that the man had been swept to his doom, and yet nobody else had the courage to let go of their own rock to go after him. Thus, the man was carried, alone, with the river’s current.

At first, the man was terrified; he had never let go of his rock before, and all he could do was close his eyes and prepare for the worst. Before long though, he opened his eyes, and what he saw amazed him: beautiful new rock formations, mountains, and animals the likes of which he had never seen before!

The man continued to float downstream, but was no longer struggling against the current; now, he was riding with it. After some time doing this, eventually the man saw something else he had never seen before: he was approaching another village of river people, and he could see even from a distance that they were all holding onto their own rocks to keep from being swept downstream. He had grown up believing that his village was the only one in the world, because nobody had ever known anything different.

As the man approached, he could see that these villagers felt the same about him; they had never seen anyone let go of their rock before, and they called out to him. The man told people as he passed by that letting go of your rock isn’t the death sentence everyone believes it is; rather, it’s the start of a wondrous journey. The villagers simply looked at him with disbelief though, and refused to let go of their rocks. With that, the current took the man past the village and onward to the next adventure.

I like this story because it’s short, sweet, and to the point. How many of us have gotten so comfortable holding on to our rock that we’re too scared to let go and experience the broader world around us? What more might we experience as a result of doing so? The possibilities are endless.

What rock are you holding on to? And why are you so afraid to let go?Guest article by Dapo black belt (2º nidan) and alumni Jason Repovs. Originally published in Zen and the Fishbowl.